Welcome to the world Puppies! Our first litter was born on 2 January 2019, delivered by Halo, a yellow Labrador and sired with Isaac (black Labrador).

A total of three pups, Liam, Luigi, Laika, delivered by C-section consisting of one yellow male, one black male and one black female.

This is Halo's first litter, she has learned the ropes of mothering and is now doing it very well without any assistance. Her pups are doing exceptionally well and making huge gains every day. Cara and Redmond welcomed the arrival of their five puppies on Wednesday 1 May 2019. Dulcie, a yellow Labrador, has delivered five new puppies in May 2019. Sired by Wizard a black Labrador/ Golden cross, the litter are doing well.

The litter consists of three yellow and two black Labrador cross puppies. This was Dulcie's first time and she is mastered the mothering role amazingly well. Flick, a Golden Retriever, gave birth naturally to 11 puppies on 30 may 2019. The pups are sired by Quazi who is a black Labrador. [Image of Flick feeding her 11 puppies]

Dodi gave birth naturally however needed help with a C-section for the last few pups.

As a first time mother, Dodi has taken to caring for them instantly and you can see the pride on her face, she and her pups are thriving. This was Carmels first litter, and she whelped naturally. Both mum and pups are doing well, with Carmel proving to be a natural. April, a black Labrador, has delivered a litter of seven pups.

They arrived via c-section that was performed at SED HQ on the 22 June. They were sired by Fagan.

As an experienced mother, April is ensuring her pups are thriving.

The picture below shows a very proud mamma and her brood. 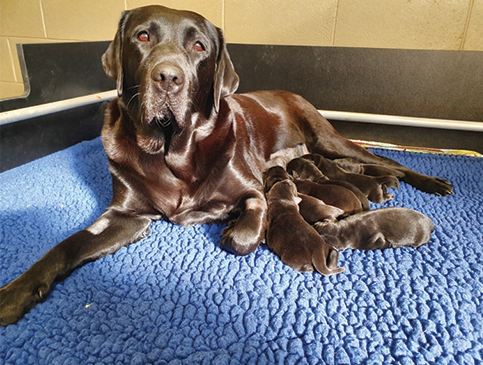 Giselle, a chocolate Labrador and Willard a yellow Labrador have welcomed the arrival of their five puppies. 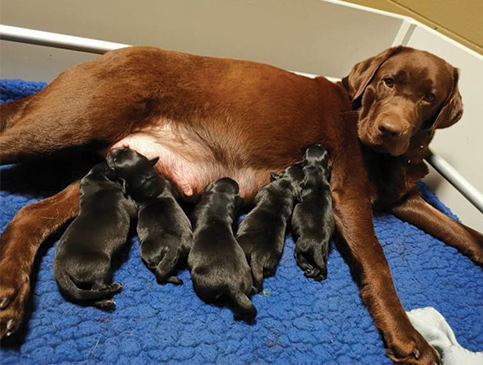 Suki, a Golden Retriever, has given birth naturally to four pups on Tuesday 23 July.

The new litter is sired by Wilson a yellow Labrador.

Suki is a first time mother and is doing very well, as are her new pups!